In December 2018, I found letters in the BT Archives from suffragette and activist Sylvia Pankhurst to the Postmaster General regarding her concerns about phone tapping. My discovery was covered widely in the national press, including features in the Guardian, on the BBC and on Radio 4’s Today Programme (from 47.26).  Below, you can read my account of the correspondence. 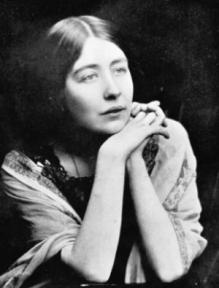 On 29th November 2018, it was widely reported that Brexiteer MP Steve Baker keeps his mobile phone in a microwave overnight to prevent it from being bugged. While this may not be the easiest method of ensuring personal privacy, Baker is certainly not the first to express unease over electronic surveillance. From the Leveson inquiry into phone-hacking to allegations that GCHQ helped Obama tap Trump’s private line, the wiretap has become common parlance in popular culture as in politics. But such concerns are, of course, nothing new, and last week, on my second day as an AHRC Leadership Fellows researcher in the BT Archives, I discovered a letter about telephone tapping written more than eighty years ago by suffragette and anti-fascist campaigner Estelle Sylvia Pankhurst. 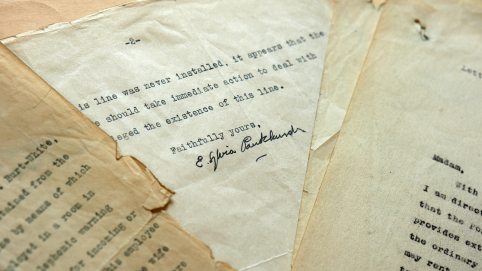 Pankhurst’s letter to the Post Office, previously unknown to archivists, concerns a legal case against a Harley Street gynaecologist. On 27th November 1932, The Daily Mail reported that Dr Harold Burt-White had been struck off the Medical Register for his ‘friendship’ with his patient ‘Mrs B’. The paper chronicles the particulars of the alleged affair between Burt-White and Mrs B (also referred to as ‘Boo Boo’) including the details of intimate evenings with ‘oysters, champagne, duck and sherry’. Evidence for the affair, it transpires, came from intercepted telephone calls. The reporter explains that the husband of Mrs B, a solicitor by the name of Bevir, made ‘arrangements with the Post Office to have a duplicate telephone line from his flat to another house’, and that ‘the line was so arranged that every time a call was made to or from the flat a buzzer sounded and the woman at the end of the duplicate line took a short-hand note of the conversation.’ Reading from the transcript in court, Mr Slade, acting on behalf of Bevir, observed that the woman hired to listen-in claimed to hear a man’s voice say, ‘I will ring you later, my beautiful.’ Bevir – who was by then separated from his wife – won his case, and Burt-White, a highly-regarded and award-winning doctor, was struck from the Medical Register. 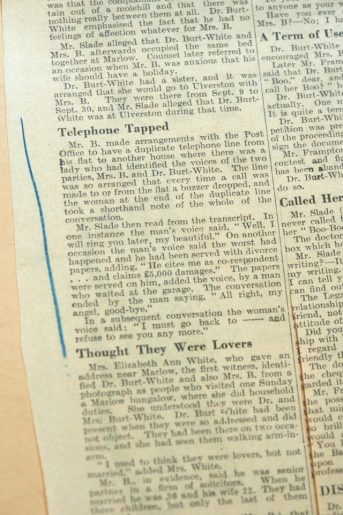 Over a year later, Sylvia Pankhurst came across the story and wrote to the Postmaster General about her alarm, which concerned not the behaviour of Burt-White, but rather the conduct of the Post Office which, at the time, ran the national telephone service. In particular, she notes her horror at the ‘extraordinary conditions’ under which the Post Office appeared to have authorised a duplicate telephone line enabling a subscriber to intercept conversations between his wife and the offender. Writing from her property in Woodford Green on 6th February 1934, Pankhurst remarks that it was alleged that the plaintiff had ‘obtained from the Telephone Service a duplicate telephone line’ and that ‘the installation of a line so arranged obviously opens the door to improper use by unscrupulous persons’. She asks the Postmaster General ‘whether such a line was ever installed, and if so, whether the installation was effected with your knowledge and whether you propose to allow such lines to be installed in the future for undoubtedly they are opposed to the best interests of the community and contrary to public policy’.

Two draft responses written on behalf of the Postmaster General and dated 13th February 1934 exist on file; it was clearly a matter that demanded some care. These drafts set out to inform Pankhurst that the Post Office ‘provides extension lines for telephone subscribers in the ordinary course of its business. Any subscriber may rent one or more extension lines from his main telephone to another room or rooms in the same premises or to other premises in his own occupation and control.’ The letter goes on to state that when a subscriber applies for such extension lines, ‘he is not asked for what purpose he requires it; and the Postmaster General does not think that such enquiry could properly be made by the Post Office.’ Despite this claim, however, further documentation in the archives suggests that the Post Office was in fact fully aware of the very personal reasons for the subscriber’s request. A letter dated 31st March from the Controller in the London Test Section to the engineering department, for example, explains that Mr Bevir required the installation of ‘facilities which will enable him to “listen-in” to conversations over the exchange line, and an indicator, if possible, to show when the main circuit is engaged.’ The letter also confirms that this was due to ‘very urgent domestic reasons’. Further correspondence admits that this required ‘non standard apparatus’, and that the Post Office granted permission to install a duplicate line to another property. None of this, naturally, was relayed to Pankhurst. 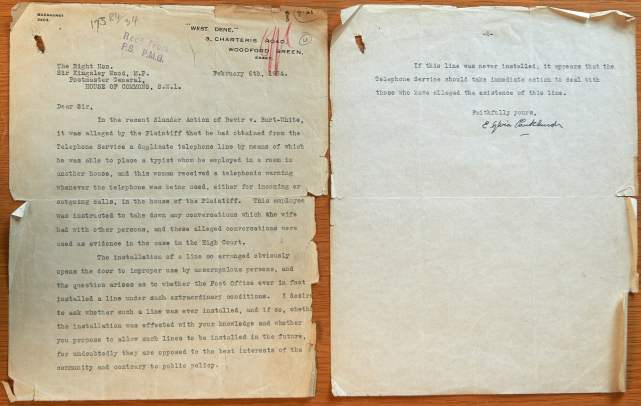 Pankhurst’s concerns, however, were not so easily allayed. The following day she wrote again, insisting that the line in this case ‘does not appear to have been an ordinary extension line’: ‘I had an extension in my own house and used it in order that I did not have to go down to my office to use the telephone, but I never received notification on my extension when the people in the office were using the telephone for an outgoing call.’ ‘Therefore,’ she concludes, ‘the telephone line described in the case of Bevir v Burt-White in the High Court must have been something quite special.’ 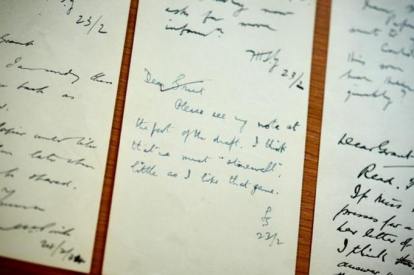 There is a further draft letter from the Post Office to Sylvia Pankhurst in the BT files, along with several handwritten notes, which remark: ‘Miss Pankhurst’s letter of the 14th does not in fact call for a reply. I think we might leave it unanswered’. An additional scrawled note, dated 22nd February, reads: ‘I think that we must “stonewall”, little as I like that game’. There is no further correspondence on file from Pankhurst or the Post Office regarding this case, and the scribbled reference to ‘stonewalling’ might mark the end of the story except for the fact that the release of secret MI5 files on Sylvia Pankhurst in 2004 reveal that her concerns about surveillance were not entirely unfounded.

Pankhurst was monitored by MI5 from the 1930s to 1948, and although the files largely concern the launch of the New Times and Ethiopian News, which Pankhurst established from her Woodford Green address in 1936, it is clear that the government had information on her involvement with the Workers’ Suffrage Federation dating as far back as 1914. Described as ‘tiresome’ in a 1948 report, the Foreign Office admits in a letter to H. L. Farquhar written the previous year that ‘We agree wholeheartedly with you in your evident wish that this horrid old Harridan should be choked to death with her own pamphlets’. In addition to monitoring Pankhurst’s movements and intercepting her letters, however, there are several references on file to ‘telephone checks’ taking place in the 1930s, as well as a monitored phone conversation between the Communist Party Headquarters and Pankhurst ten years later. Pankhurst’s letters to the Post Office concerning individual privacy suggest that she was in fact on to something all along.

Since Pankhurst’s letters to the Post Office in 1934, espionage has gone digital, and current media reports of electronic surveillance, for some, are conducive to hysteria. In 2017, for instance, WikiLeaks claimed that both MI5 and the CIA had created a ‘fake off’ mode for a Samsung television that allowed them to secretly record viewers. Steve Baker should perhaps keep his TV in a microwave too. As we celebrate the centenary of women’s suffrage, it is worth noting, however, that although espionage is nothing new – it is often cited as the second oldest profession in the world – the means by which we listen-in seem to grow ever more elaborate. What would Sylvia Pankhurst have to say about mobiles in microwaves and televisions that watch back? Whatever you think, you might want to keep it to yourself: someone’s probably listening now…. or perhaps you are the mole. 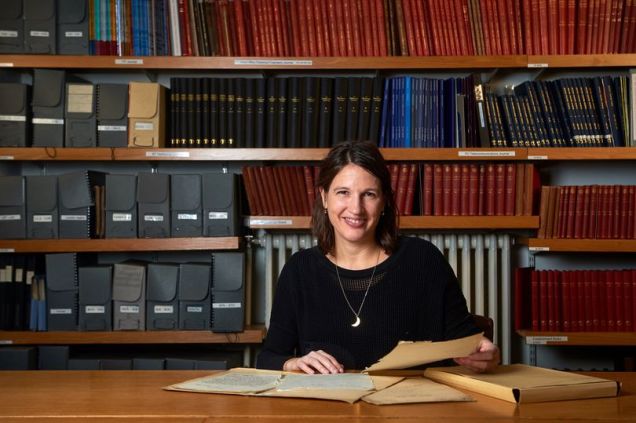